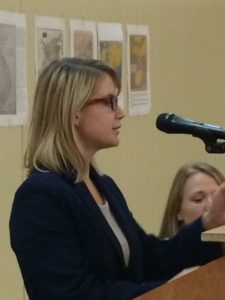 On September 29th, at the Institute of Justice of the Russia Federation- Supreme Court, the Committee on Constitution and Law Studies cooperated with the “Open Law” Club and the “Law of Peace” Center to organize the workshop “Legal mechanisms in settling territorial disputes in South China Sea”
The workshop drew attention from experts from well-known Russian institutions, such as Professor Umnova I.A, Head of Committee on Constitution and Law Studies – Institute of Justice, Doctor Lokshin, Institute of Far Eastern Studies – Russian Academy of Sciences; Ms. Piatachkova, Deputy Head of Faculty of Asia – Pacific – Senior School of Economics. Notably, many students from the Institute of Justice who will be lawyers and judges, participated the workshop.
The workshop began with a brief introduction about the latest developments in South China Sea, with a series of illegal activities from China such as expanding reef, building runways for military purpose in Fiery Cross reef. The brief introduction was conducted by Mr. Valdimir Nicolaev, Chairman of Open Law Club – Institute of Justice. The introduction provided basic informataion for the students about recent developments in South China Sea, which played as platform for the student to study legal issues in South China Sea disputes.
The workshop was very interesting, with presentation from top experts on Asia from well-known institutions of Russia. The experts gave the students a lot of useful information about the South China Sea, including the ruling of the Permanent Court of Arbitration in The Hague about the arbitration between the Philippines and China. The presentations at the workshop were in-depth analysis of the meaning and importance of the South China Sea; the situation of a territorial dispute over the South China Sea today; the legality of the ruling of the PCA. All experts and scholars called the involved parties to resolve the territorial disputes on the basis of respect for international law and the United Nations 1982 Convention on the Law of the Sea (UNCLOS).
The presentation «The ruling of the Permanent Court of Arbitration established under Annex VII of the 1982 United Nations Convention on the Law of the Sea (UNCLOS): the meaning and impacts», by Dr. Lokshin GM a historian and top expert from Center of Vietnam and ASEAN-Far East Institute Russian Academy of Sciences presented; Presentation «East Sea issue after ruling of PCA», by Ms. Anastasia Piatachkova, Deputy Director Asia — Pacific — Russian Senior School of Economics… directly mentioned the latest ruling of the PCA.
Speaking at the workshop, Dr. Lokshin GM emphasized: «The ruling of the PCA put an end to this problem when confirming “the nine dash” line is not based on any basis and has no legal effect. Assessing the value of the PCA ruling for the settlement of the disputes in the South China Sea, Dr. Lokshin emphasized: «The ruling made clear interpretation of the provisions of UNCLOS on the basis of international law. This provides a good legal tool for small and medium-sized countries in Southeast Asia to protect their legitimate interests in the disputed maritime area «.
Piatachkova Anastasia analyzed some issues in the South China Sea dispute and concluded with a number of recommendations, such as: «The roles of multilateral mechanisms in Asia-Pacific are very important in resolving the South China sea issue in terms of the conflict between the general interest of the country and of the parties involved. The ruling from the PCA only shows more clearly the contradictions, countries should now prepare a new approach to cooperation on this matter on the basis of bilateral and multilateral channels»
Sharing about his views in resolving disputes in the South China Sea, Ms. Piatachkova said: for the sake of the world, including Russia, this is a very important issue because for us, the relations with China, Vietnam and other countries in Asia — Pacific region are very important. And we believe that the dispute should be resolved by peaceful means, within the framework of international law».
Deputy Head of Workshop Organizing Committee, Ms. Svetlana Popova, Committee on Constitution and Law Studies, Institute of Justice: Russian Supreme Court is very pleased with the outcomes of the workshop by the practical content to students of the Institute. «Today we bring this discussion to the students because this is important information and necessary» she said. 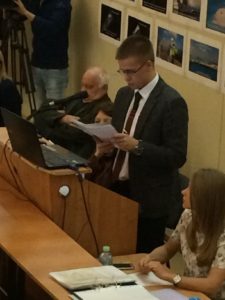 At the workshop, the experts responded to students’ questions about the arbitration and the ruling of PCA rejecting the claims of the China on the “nine dash” line on the basis of international law, which in favors of peaceful resolution for the disputes in the South China Sea, including the use of legal process.
Stating his views on one of the hot issues of the world, Mr. Nicolaev VA, Chairman of “Open Law” Club — Russian Institute of Justice said that this is a very urgent problem, especially when related conflicts have not been resolved. «The ruling of the International Court of The Hague has important implications, can be seen as a step forward on the path of resolving the disputes. This workshop has brought a lot of information for our students, Russian citizens, to help increase understanding the situation both legally and politically »
After workshops, the Justice Academy students hope Russia will continue with discussions related to the theme of conflict resolution, including the South China Sea dispute.